skip to main | skip to sidebar

I went on holiday to North Devon - Porlock and the surrounding area - with my partner, S, and their parents at the end of last week. I took with me the last five Silver Helms and managed to get them finished just in time for the Middlehammer Forum's Tale of X Gamers deadline:

In the first month I painted:

I'm pretty pleased with that. Next up will be 14 High Elf Archers with Full Command, and a Mage.

On another note, while I was on holiday we visited Porlock Weir, and I found some pillboxes:

There was this slightly sunken one, which had been covered in stones taken from the beach as, I think, a form of camouflage. It appeared to be an M.G. bunker but as I couldn't see the front embrasure I'm not sure.

And this more intact one that appeared to have been turned into a storage shed at some point, but it's definitely seen better days - the stove's chimney is broken, the door smashed down.

Exmoor was beautiful. The sea, as always, a wonderful thing to watch.

In between painting High Elves (those Silver Helms are such a pain in the bum!), I have been helping out my old pater, Al Front, with some of his backlog:

I've really enjoyed painting these little fellows; they're so simple - flat colours, Agrax Earthshade, shields, matt varnish, base, done. I am trying to paint the shields so that everyone has a different design. I don't know how that will end up but it's jolly fun. So far I have finished three stands of 'Warband', one stand of 'Skirmishers' and have eight stands of 'Spearmen' to go.
As well as that, on Tuesday I went to my friend J's flat along with J2, K, Dr D, and A to play some more Starfinder.

The Bandit Queen space bar, owned by some naughty bunch of criminal types. Scenery by K.

"Can we come in?"
"No."
"FIGHTING IT IS THEN" (and, reader, Katakayo killed both and ate their faces)

After dispatching the goons playing poker, Katakayo opens the next door, revealing the gang leader and her bodyguard, another angry space lizard.
"A worthy opponent!"
We leveled up, when all was said and done, and Katakayo's personal tally now stands at 6 kills and 4 faces eaten. 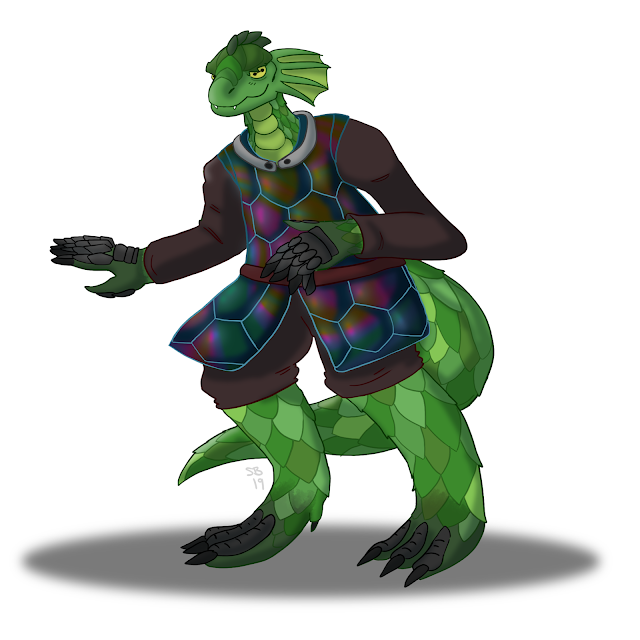 This, by the way, is what Katakayo Face-Eater actually looks like, courtesy of my partner S, who takes commissions!

I really dislike painting cavalry. However they are pretty essential to most fantasy armies, which is why my High Elf Army of Tor Sethain has 9 Silver Helms in it (the full unit is brought up to 10 by the inclusion of a High Elf Prince).

Today I finished the front rank with the musician and a basic Silver Helm:

Just another five to go and that's the cavalry element done and I can start on a unit of infantry (probably one of the blocks of archers).

As a side note, I am not impressed with GW's 'Corax White' paint, which isn't really white - it's like a very very pale grey, which you can clearly see on the shield designs. Sadly it is my only white at the moment so I'm going to use it throughout this army for continuity's sake.

Into the Shadow Deep... and some Strontium Dogs!

On Tuesday, myself, my long-time gaming partner J, and our club friends K and P assembled at P's house to enter the Shadow Deep together. Here is a short and picture-heavy account of Mission 1, Scenarios 1 and 2:

The rangers and their companions enter the village looking for their missing fellow Ranger, Aventine, only to be surrounded by shambling corpses!

Setup. Rangers in the centre around the trees. Barn to the north, outhouses to the east, dilapidated shed to the south, big house to the west. Undead at the NE, SE, SW and NW points. Giant rats by the barn and the big house. Clues in white, with extra tokens inside the big house and the outhouses. The clue on top of the big house would be moved closer by Lorcan, K's Ranger, before the start of Turn 1.

End Turn 1 - Iorek has eaten his first giant rat and Farmer Fred, found by Petal, has scythed down one of the shambling dead. Vicar and Big Mac are struggling with one of the ex-villagers, while Daedalus and Nyx have their hands full with a giant rat and one of the undead.

End Turn 2 - Nyx has been knocked out by a heavy blow from the undead, Daedalus has been injured by the rat. Fred fails to open the door to the big house (he's lost his keys), while Big Mac has put down two of the walking corpses. The barn has collapsed, and Lorcan has narrowly avoided injury! Ingvar continues to note everything down. Petal and Iorek raced to the aid of Daedalus, with Iorek tearing apart the zombie that took out Nyx.

End Turn 3 - More shamblers have appeared, and Farmer Fred has uncovered a corpse with tracks he recognises inside the big house. Petal casts heal on Daedalus. Vicar is attempting to get into the outhouse to check the clue there, while Daedalus has uncovered the body of Aventine and helped himself to his magic sword...

End Turn 4 - The clue that Big Mac checked turned out to be a corpse that wasn't quite dead yet, and he is badly injured by its surprise attack. More of the villagers stagger, blindly, towards the Rangers. Petal has dispatched one with her bow and arrow, while Lorcan struggles with another.

End Turn 5 - all seems quiet, now, with no more foes (or clues!) on the field (Petal having shot a zombie) - but wait! from the pigsty comes another ex-villager! And from the same directions as before stagger yet more! And a giant rat ambushes Lorcan! (we decided to pull all three remaining events at once to give us more to do)

End Turn 6 - Iorek bounds over to the nearest villager's rotting body and savages it, while Petal adds another zombie to her tally with the bow. Daedalus's magic sword saves his life in combat while Lorcan and Vicar hack the giant rat and a zombie apart.

End Turn 7 - The last zombie villager on the field is beaten back by Daedalus, but he can't quite get the killing blow in...

End Turn 8, End Scenario - ...so Petal races back and finishes it off for him.

Final tally: 3 dead giant rats, 14 dead zombies, Nyx made a full recovery, all six clues uncovered (including Aventine and his sword), and all signs pointed to some deadly creatures in the nearby woods.

Setup - the nesting trees on the north-eastern side of the board, running from north to east. The Rangers and their companions line up from west to south. In front of them are scattered cocoons and the chittering and rustling of giant spiders.

End Turn 1 - A general advance. A zombie lurches out of one web cocoon and attacks Nyx and Daedalus, and another tears and bites at Big Mac and Lorcan. Two giant spiders race towards Vicar.
A survivor, however, is saved from the encasing cocoon by Petal - Wendy the washerwoman.

End Turn 2 - the zombies are put down easily, and Iorek gets a nasty surprise when a giant spider bites him, the venom running through him causing the stout hound some pain.  Vicar and Ingvar finish off the giant spiders in the middle. Petal finds a dead body in the second cocoon she searches.

End Turn 3 - Petal casts heal on Iorek, who finishes off the spider. Wendy moves up to the hound, and ruffles his fur. More spider nests are identified, and Nyx stumbles into a web!

End Turn 4 - Three of the nests are torched, and some treasure is found. The spiders are conspicuous by their absence.Petal finds another corpse.

(No photo!)
End Turn 5, End Scenario - the remaining nests were easily torched and the wood cleansed of the spiders that had caused such devastation to the little village nearby.

Final tally - Iorek ate a giant spider, and the others did for two zombies and four more giant spiders.


Overall jolly fun game. We burned through the two scenarios pretty quick, starting at around 7ish and finishing about 9:30pm. There were a couple of dicey moments but by and large the four rangers and their companions were on top of things throughout, which led us to have a quick discussion about there not being enough enemies. However we agreed to try out the next Mission with no tweaks to the number of enemies as if the dice had come up a bit different we could all have been killed quite quickly indeed.

In painting land, I've been procrastinating on my High Elves by painting some more of the figures from The Good, The Bad, And The Mutie set:

It's Wulf Sternhammer and the Gronk!

I really like these figures, and am super pleased with how the Gronk turned out.

Either a year ago, or maybe two, my Dad bought Warlord Games' Strontium Dog starter set and gave it to me to build and paint.

I am ashamed to say it has taken me this long to put any paint beyond undercoat onto any of the models (which are superb; they look just like the late, great, Carlos Ezquerra's drawings).

There was no way I was going to start with anyone other than the Strontium Dog, Johnny Alpha himself:


Really simple paintjob, given a good solid coat of gloss varnish to really play up the cartoon aspect of it all. Wulf Sternhammer and The Gronk are next up. Oh, and I should probably paint some more Silver Helms as well, but cavalry are booorrriiiiinnnng.


I have reached the final mission in my non-streamed playthrough of MechWarrior4 Mercenaries, and my final mercenary company looks like this:
Number One Lance:
Fafnir 1-1 Grim Reaper (2x ER PPC, 2x Clan LBX-AC20s, ECM, LAMS); piloted by Padraig 'Spectre' Chulain

Longbow 2-4 Banshee Wail (4x Clan LRM-20s, twin ER MLAS, BAP, LAMS), piloted by Emily 'Spirit' McCormick
Total weight - 770 tons
Chulain's Commando also has the support of the Stalwart Support mercenary company, and own Griffin military base on New Canton in the Chaos Marches. Not a bad way to come out of being on the losing side in the FedCom Civil War! Shame about the Word of Blake Jihad though.
...now to get the minis to represent them... and some enemy to fight them... aaargh!

I could also get my company commanders' 'sporting mechs' that he used to compete on Solaris VII.

Actually, this sort of thing makes me want to get a 3D printer.
Posted by The Worker at 18:32 No comments:

Rangers of Shadow Deep... in the Cursed City?

So I've been on a bit of a Mordheim kick of late, and parallel to that have also been working on some Rangers of Shadow Deep stuff.

Today I slightly repainted my old Ral Partha wolves, and did some Giant Rats (in two batches, because I painted the undercoated ones then hand-undercoated another three). These will work for both Mordheim and Rangers of Shadow Deep, so without further ado, some pictures:

Giant Rats! These are all Games Workshop, some metal, some plastic.

Ral Partha wolves, given a touch-up to improve (slightly) the enthusiastically bloody paintjob my 12 year old self gave them back in 1999.

On Tuesday I will venture into the Shadow Deep with some friends, and a while ago (before I restarted this blog) I painted myself a Ranger and some Companions:

Woman-at-Arms, Joanne the Tall (or Joanne the Giant, if you think she can't hear you and no-one will tell her you said it). Figure from Dark Sword Miniatures.

The merry band, including Iorek the bloodhound (figure from Ground Zero Games).

So there you have it. A bit of Mordheim madness and some Rangers of Shadow Deep. There will be photos from the RoSD games on Tuesday, of course.

The Worker
I'm 29, have a six year old son, wargame, and work in a call centre.